Redline | CIM Magazine: Getting the message across – Redline | Redline Communications

Redline | CIM Magazine: Getting the message across 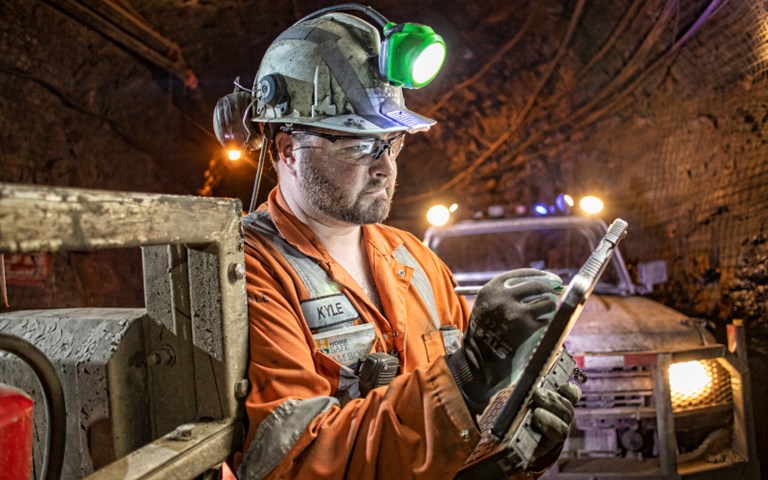 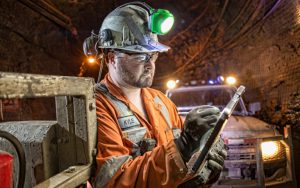 A worker uses an LTE-connected tablet underground at Vale’s Coleman mine. Courtesy of Vale Canada

Reliable underground communications. Decreased time to locate workers in the event of an emergency. Remote control from above ground of automated equipment operating deep below the surface. These are some of the goals for mining operations undergoing a digital transformation as they look to reduce costs and increase safety and productivity. But how to get there?

As mining companies consider options for newer-generation networks to support the underground digital mine, two technologies have come to the forefront: Wi-Fi and private LTE. One mine may decide Wi-Fi is best for its new communications platform due to practical considerations of underground topography, age of the mine and relative newness of existing network infrastructure. Another mining operation may deploy private LTE in several underground mines as part of a company-wide digital transformation initiative.

Building from a backbone

Glencore’s Kidd Operations in Timmins opted for Wi-Fi in June 2018, when it began rolling out Wi-Fi-enabled devices to all of its mine workers for improved communications underground. In total, Kidd has provided more than 400 mobile phones to its workers, plus 30 laptops to supervisors. Prior to that, Kidd’s system of communication was a leaky feeder radio system, which still remains in the ramp. Hardwired telephones also remain in the mine’s refuge stations.

“Leaky feeder is pretty difficult to maintain,” explained Ryan Roberts, Kidd’s manager of mine operations, “and in our mine, it’s not run into the active headings. In the past, if you wanted to communicate with someone, you would have to walk out of your heading to communicate.”

Kidd’s focus for its new communications platform was getting Wi-Fi coverage to the working face, Roberts said.

“A lot of mines are looking at trying to get Wi-Fi coverage 100 per cent throughout the mine. We have over 100 kilo­metres of drift underground, so we need to concentrate on areas that are being actively worked.”

The 53-year-old mine uses a shaft and internal winze to access the mine workings, currently at a depth of 9,600 feet or about three kilometres underground. The Wi-Fi system is used all the way down at the mine’s lowest level, Roberts said. With Wi-Fi-enabled devices, mine workers and supervisors can text message, take photos and access documents in the messaging system – functionality not possible with the previous leaky feeder radio system.

The Kidd mine has a relatively new fibre network, initially installed with the D Mine expansion in 2006 and extended in 2015-2016 as part of a ventilation-on-demand (VOD) system installation. The VOD system provided four or five permanently installed Wi-Fi access points on each of the mine’s 32 active levels, but not in the active headings. Each level has a fibre-to-Power-over-Ethernet (PoE) converter box and Wi-Fi is extended into the headings using PoE cable. Kidd uses about 60 portable access points that are moved to active headings, Roberts explained.

Kidd’s manager of mine technical services, Iain McKillip, touted the flexibility and ease-of-use of the Wi-Fi system. “Any worker, any miner, regardless of training, can go and bring a portable access point in on their own and hook it into the system to bring service into their work area,” McKillip said.

He added one benefit of using Wi-Fi is the number of off-the-shelf solutions that can be used, such as Wi-Fi-based cameras for monitoring sensors or locations. In addition, Kidd was already using a Wi-Fi-based personnel tracking system, so that was another driver for choosing Wi-Fi for its communications platform, McKillip said.

“The reason we went down the route we did and not LTE is because we already had the backbone in place,” Roberts added. “If we were a newer mine, we would probably be looking at what’s the trade-off between the different systems, but it was very easy for us to keep extending the system that we had.”

Understanding a mining customer’s needs is key to determining the best wireless technology to use, said Jeremy Bernstein, technical solutions advisor for solutions provider 3D-P, based in Calgary. 3D-P is “vendor-agnostic” and offers multiple wireless options to mining customers, including Wi-Fi, LTE and meshing radio technology.

Comparing technologies, Bernstein pointed out that Wi-Fi is a line-of-sight technology with limited signal distance range. “In some cases, it just may not make sense to have a traditional 802.11 [Wi-Fi] network,” Bernstein said. “For the most part, you really need to be able to see your access points.”

In comparison, LTE provides far-reaching coverage due to the technology’s better receive sensitivity, Bernstein said. However, although LTE is good for downloading data to devices, it’s not particularly good at sending large amounts of data upstream, Bernstein added, and mining applications tend to be upstream-centric.

Bernstein said he thinks mines may start to consider operating hybrid variants of these wireless networks. “So maybe autonomy will run on LTE and then the rest of the mine will run on standard Wi-Fi, or vice versa.”

Vale Canada has decided to deploy private LTE throughout several of its underground mines in Canada ­­– five mines in Sudbury (Coleman, Creighton, Copper Cliff, Garson and Totten mines) as well as its Thompson mine in Manitoba and the underground expansion of its Voisey’s Bay mine in Labrador.

RELATED: BATTERY ELECTRIC VEHICLE MANUFACTURERS DETAIL THE SAFETY CONSIDERATIONS FOR THE NEXT GENERATION OF UNDERGROUND EQUIPMENT

“We want to change and innovate within the way we work at Vale, so we want to be much quicker to market and use innovative technologies,” Atkins said.

LTE’s biggest value has been on the productivity side, relating to automation of underground equipment, which typically occurs at the farthest point in the mines, Atkins explained. “Getting access to coverage at the face has been problematic with Wi-Fi…As well as from a cost perspective ­– and this can be debated back and forth – LTE will have an overall lower cost of ownership compared to Wi-Fi, for the coverage that it provides,” Atkins said.

LTE is a better solution than Wi-Fi at the face where blasting often occurs, he added. “The concussion coming off that blast would blow up our Wi-Fi infrastructure, whereas LTE is far enough back and gets enough coverage where it doesn’t get impacted.”

To date, Vale has purchased 78 kilometres of radiating cable, to be used as the antenna for LTE networks in four of its Sudbury mines, said Richard Deisinger, LTE backbone project manager at Vale. So far, 20 kilometres of cable have been installed and three of the mines – Garson, Creighton and Coleman – have LTE networks up and running, with Copper Cliff North Mine still to come.

Vale conducted a proof-of-concept trial at its Garson mine in summer 2018, and the almost two-kilometre-long LTE network on the mine’s surface ramp went live in January 2019. “Garson surface ramp is not a very deep mine. We only went down from 100 to 660 [feet]. Our deepest implementation [currently] is at Creighton Mine at the 8,070 [feet] level,” Deisinger said. “And then Coleman, we’ll probably have the longest length, almost 10 kilometres in one straight length, lighting up a ramp there.”

Chris MacDonell, senior network analyst, digital transformation, at Vale, explained how LTE has improved control of automated equipment in the underground mines. “Since the equipment is generating real-time video and control traffic, it needs constant connectivity to the network. One of the struggles that we had was over large distances, as the equipment roamed between access points, we would have intermittent connectivity issues. This was alleviated by the LTE because we could have a cell that spans up to a kilometre and we could cover an entire level with a single cell.”

Looking to the future, MacDonell said Vale is watching what’s happening in terms of 5G technology, but the mining company hasn’t found a use case to drive it towards 5G at this point. “We have validated that all of our infrastructure is capable of supporting 5G when that is mainstream, but at this point we feel that the benefits that we can deliver with the 4G network satisfy all our current needs.”

Ambra Solutions, a systems integrator and original equipment manufacturer (OEM) based in Trois-Rivières, is the solution provider for Vale Canada’s LTE network deployments. According to Ambra’s president, CEO and founder, Eric L’Heureux, LTE is more cost-effective than Wi-Fi, in terms of both capital and operating expenditures.

“With LTE, a single LTE radio can cover six kilometres of tunnel, whereas if you want to do it with Wi-Fi, you’ll need between 60 to 80 Wi-Fi access points to cover the same area,” L’Heureux said. 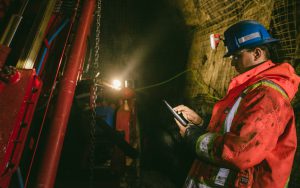 In addition, the equipment installed underground is simple to deploy and manage because it doesn’t require IP addressing or complicated configuration. “The electricians are being trained to do the deployment, because for them, deploying the LTE cable is the same as deploying an electrical cable, so it’s fairly easy to train them,” added  L’Heureux.

Another OEM in the private LTE network business, Markham, Ont.-based Redline Communications, says underground mining companies have only recently started to look to LTE in a big way for their next-generation networking needs.

“I want to call it a wake-up call,” said Reno Moccia, executive vice-president of sales and marketing for Redline.

“As far as broadband in the mining sector becoming critical, it has really only become an awakening in the last 18 to 24 months. And I would even say it’s been the last six months that we’ve seen that watershed, of mining companies recognizing that LTE fits their needs in their business applications much better than some of the alternative technologies.”

Leaky feeder: coaxial cable with holes in its outer con­ductor to allow radio waves to be transmitted along the length of the cable; acts as an antenna for analog hand-held radio communications

This article originally appeared in CIM Magazine March 2020 issue as “Getting the message across” By Linda Stuart | March  5, 2020